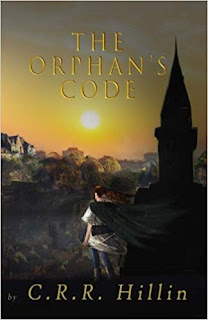 This is my first post here, and I decided to start it by reviewing The Orphan's Code by the talented C.R.R Hillin, who so kindly sent me an ARC in exchange for a review.

Welcome to the city of Bermeia: once the seat of a vast empire, now a chaotic hive of oppression, civil unrest, and corruption. Within its walls, the lives of hundreds of thousands of people intertwine. A rogue thief narrowly escapes arrest again and again as he takes revenge upon the soldiers and nobles who prey upon the weak. A homeless girl hunts for her next meal and a way out of the city past the guards at the gate. Four teenagers hide in the ruins, fugitives of the law working desperately to protect and feed the group of orphaned children in their care. A clandestine organization of women with mysterious powers sends one of their own to serve as a spy in the royal court. The last remnants of the royal family spread tendrils through the city’s vast criminal network, slowly enacting a decades-long vendetta. And the man who usurped the crown sits uneasily on his throne, hanging onto his kingdom by a thread even as he seeks to create a new empire. And all of them, though they might not know it, are searching for the same boy: the heir to the throne, missing since birth and about to come of age. The people are waiting.

The opening line of the novel is this statement "They deserved it.", and suddenly I felt as if I was right there, in the dungeon, watching Romero (the King) torturing Liam (a teenager boy who gets caught trying to assassinate the King) trying to to get information out of him. by the end of the first chapter, we see that Liam is burned alive to set an example for the likes of him. As the story unfolds, we are introduced to different characters, Kayo, headstrong, loyal, goodhearted, Dominic, a friend, a brother, and always has Kayo's back, Rose, a homeless thief with trust issues, aggressive but once she feels welcomed, she shows a heart of gold, Alysia, takes care of everyone around her and many others who are important to the plot.

My favorite character was Rose (lol) I just loved her, the way she carries herself and how she handles every situation she finds herself in. I liked her responses and that she doesn't like to be bullied. Living in the streets her whole life taught her that she can only depend on herself to survive. I can't say the same for Kayo, he always had someone to get him out of trouble be it Liam, Dominic, Alysia (mending his wounds), and even Rose. Dominic I sympathized with the most, he's such a sweetheart and I wished he would be as happy as he deserves. As the most hated character in the novel, well, the prize goes to Romero of course! talk about selfish, egoistic, heartless man!


I fell in love with this novel, from the first sentence I was hooked! The writing is so good, I liked the build-up of the events, and how the characters' lives are intertwined with each other. When I received the ARC, I didn't know that the novel has a sequel; I was nervous as  I was reaching the final pages with no sign of any resolution, and when I finished it my reaction was "NO! no no no noooo!" I need to know what happens next. The end is such a cliffhanger that it left me on the edge of my seat! I did not expect the events will turn out the way it did! I can't wait for the sequel to come out, hopefully soon enough!

The novel is totally worth reading, I highly recommend it!